Secret Football Shirts were the lucky company to receive my first ever mystery box order. I didn't want my first purchase to be from a popular establishment which is the reason why I decided to buy one of their mystery boxes. In fact I chanced upon their website having noticed one of their Google Ads as I was scrolling through my phone. I ventured onto their website and decided that these were the perfect candidate to help kick off my foray into the curious world of football shirt mystery boxes.

Upon landing on their homepage you are met with a simple but effective layout detailing the two products that they offer. These are adult and children sized mystery boxes. Between ordering my football shirt and writing this review they haven't had any children sizes shirts in stock for you to purchase. The adult boxes retail at £29.95 and the child boxes will retail at £24.95.
Even though this was my first time ever purchasing a product like this, it certainly isn't my first time buying a football shirt. Based on my hundreds of transactions previous to this, I determined that the price of the box seemed reasonable enough. You certainly could purchase a more than palatable football shirt for this price so there is no reason why you shouldn't be able to receive one from a box at this price point. However before I purchased the box I thought I would do a little exploring around their website, along with their accompanying social media just to ensure that I wouldn't be blindly sending them my money and then never receiving anything back for doing so.

Like I mentioned previous their website is pretty sparse but I think this might well be down to the fact that they seem to have started trading at the beginning of this year (2021). Their social media accounts are all in their infancy also which further backs this claim. They do have a "How It Works" page which offers a brief descrption of what to expect from their mystery boxes. 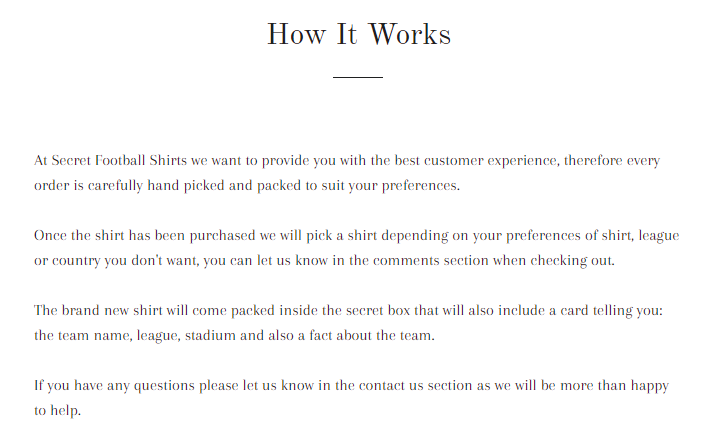 As you can see it is quite a terse illustration of the service they offer. It is possible that this will be expanded upon as the business grows but from some of the other mystery box retailers that I have browsed, there is one key facet that they seem to have neglected. Most other places will at the very least tease you with the value of the football shirt within. Some may suggest that there is a chance that you could end up with something more valuable than what you have paid, whereas some will simply say that the RRP of the shirt in the box will match the price that they are selling them for. In this instance there is no mention of what to expect. Which might cause you to raise an eyebrow at the very least. So I decided to explore their Instagram page to see if any clues could be found out there. As it turns out there were. One of the three posts that they currently have made shows this Marseille football shirt.
Having come to the conclusion that the kits being offered were most likely authentic I decided to take the chance and purchase my first ever mystery box! What could go wrong? Well...

The purchasing process was simple enough. They accept most major methods of payment and the user interface worked without any issues. I instantly received my order confirmation via email and then later that day my mystery box had been marked as shipped. Can't fault that service. A few days later and the package appeared on my doorstep. My intention was to open this package on my YouTube channel and that is what I did.

When I opened the outer packaging I was greeted with a plain carboard box which housed the football shirt. There was no branding on the box which I thought was a bit poor as it is simple enough to apply a basic logo to a material such as cardboard. This might be something that is improved upon as the business grows. I then opened the box and was introduced to my new football shirt. Well I say football, to be more specific, it was a futsal shirt. Something I recognised instantly. This immediately changed the dynamic of the box opening. In my head I had anticipated all sorts of different outcomes from it being fake, to it being pre-owned. I even thought there was a chance it might just be an empty box. I hadn't expected to receive a shirt for what is technically a different sport. Or at least a different genre. If it had been a cricket shirt then I would be justified at feeling aggrieved at the outcome but because this shirt is still technically a 'football' team I wasn't sure how to react. I continued to review the jersey as I normally would when I open a standard package and if we focus solely on the shirt then it is a tidy little piece by the folks at Joma. It ticks all the boxes required for a shirt to enter my football shirt collection.

​However at the end of the initial opening I still didn't know how I felt about this shirt. Am I right in thinking that this shirt shouldn't have been included? Or am I being ungrateful and I should accept what I received a move on? I decided the best course of action would be to do a bit of further investigating, along with some not so subtle opinion gathering on a "hypothetical" situation that I mentioned on my Instagram story.

I jumped back on their Instagram page to see if anyone had started posting their purchases from Secret Football Shirts and to my delight they had. Two customers had uploaded photos showcasing what they had received and I must admit I did feel a bit miffed. They had both acquired reasonable football shirts from their mystery boxes. Admittedly I wouldn't have needed either of those shirts, which does raise a whole different issue as to why mystery boxes might not be worthwhile. But at least these two customers could sit there and actually say that they gained a football shirt from it. I casually messaged both of these two people and asked them about their purchase under the guise of someone interested in buying one for myself.

The first gentleman received a Grasshopper Zurich football shirt. From the photo uploaded it looks like it is the 2017/2018 home shirt which has been for sale on Classic Football Shirts for £19.99. In all honesty I might even have replaced my current Grasshopper shirt for that one had I received it. When I asked the new owner of that shirt if they were satisfied with what they had received they responded with a single "yeah". I mentioned that I opened mine and that I was unsure about my shirt. They asked what I had received and after I had shown him, I asked him if he would be happy with a futsal shirt. His response this time was "nope".

The second example was a chap who had received a Marseille shirt, though not the one mentioned above. It was the home shirt from the same season. Again this is for sale on CFS at a price of £27.99. I didn't really need to even message this gentleman about his purchase as he included this caption with his post: "Lads just got my class kit from @secretfootballshirts  you should all try to get 1 yourself too quality". At first glance it looked like it might have been a planted account to help boost the reputation of the business but having spoken with him I'm pretty sure that isn't the case. I didn't mention that I had bought one this time just in case though.

So having seen these two decent pulls I was feeling even more annoyed knowing what I could have got. So I decided to jump onto my Instagram and ask the question; "Would you ever buy / include a futsal shirt for your football shirt collection?" I ended up with a mixed bag of responses.

If I take away my own experience and focus solely on what other people have exhibited then I think it is only fair to say that you could do worse than buying a mystery box from Secret Football Shirts. The value of the boxes at £29.95 is more than acceptable and if the posts and marketing is to be believed, then there absolutely is a chance to come out of this with a more than satisfactory football shirt. I think you can forgive some of the smaller blemishes such as there being no branding on the boxes or typos present on the "information card (which is actually paper by the way)" and put this down to the company still being in its infancy. The shipping times were immaculate and they actually do offer a refund opportunity, though I've not tested this. You might think I would have done with everything I have said but I'm going to keep all my football shirts no matter how poor and frustrating they might be.

One thing I will say though and that is this. A futsal shirt should not be an option in an enterprise like this. Yes some people might accept receiving one in the post but a significant majority wouldn't and this is a tremendous gamble to take with your customer base. Especially knowing how temperamental football shirt collectors can be! It is already a speculative venture when buying a product like this and it shouldn't be made more so by the inclusion of red herrings such as a futsal shirt. I think if they are to remove the futsal shirts from the offering then I would could probably see myself recommending them as an option for people who are looking to buy one of these mystery boxes. I have no doubts that there will be worse candidates as I trawl through the world of mystery football shirt boxes.